Awareness campaign for learners in cities and countryside: Tuesday 30th, May to Sunday 11th, June 2017 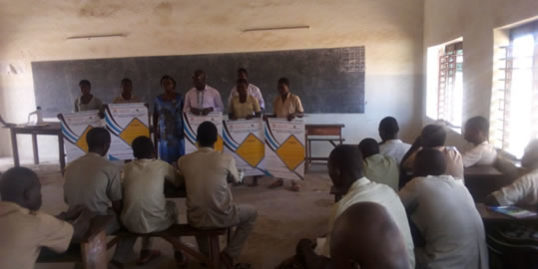 – Objective of the Mission: to sensitize and inform the actors of secondary education, in particular the departmental directors of this teaching level, the headmasters of colleges and high schools, as well as the students themselves on the existence of the scholarship offered by The MasterCard Foundation;

– Steps of the tour and the meeting with the Minister of Secondary, Technical and professional training.

The delegation was received by the MESTFP, which is the supervisory authority in charge of secondary education, technical and Vocational training. The choice of this order of instruction is justified by the fact that the MasterCard Foundation program concerns the undergraduates of the 2016-2017 promotion and thus the learners currently enrolled in the Scientific and technical series of the 7th year’s classes and by Extension of the 6th year learners (the year before the baccalaureate). After listening to the presentation of the MasterCard Foundation’s scholarship program, the Minister congratulated the program team for the initiative to address the issue of school dropouts and especially for girls because of the lack of resources. He reassured the delegation of all his support and that of his cabinet so that the awareness and information would be carried out on a national scale to allow the participation of all Beninese who meet the criteria defined by the program. He instructed the Secretary General of the Ministry to provide the team with all the administrative and institutional support needed to facilitate their transition to school districts and colleges and high schools.

Working session with the Secretary General of the Ministry: The Secretary general of the MESTFP also welcomed the project and reassured the delegation of his readiness to accompany its implementation. He automatically signed a briefing note for all departmental directors for the purpose of making all the arrangements to facilitate the team’s mission.

Working session with the various departmental directors of secondary, technical and vocational training:

With the mandate issued by the Secretary-General, the team undertook the visit of the departmental directors of Secondary education. Various presentations made included at each step the MasterCard Foundation’s scholarship program, the content of the scholarship, the eligibility requirements, and the clarification of any concerns about the program. Here is the list of directions visited: – Atlantique, Littoral, Zou, Plateau, Ouémé, Mono, Couffo, collines, Alibori, Atacora, Donga, Borgou. It should be noted that the opportunity was given in the departments of Atlantique, Littoral, Couffo and Alibori to meet the majority of the heads of institutions during a working session organized by the departmental management to bring the information directly to them. In the northern part of the country, the delegation also met with the departmental directors, except in the Atacora where the departmental director was represented by the head of the office of examination and competition. The same warm welcome was offered to the delegation with the same readiness to facilitate access to institutions under the jurisdiction of these departmental offices.

The other highlight of the tour was the direct contact with the learners of the high schools and colleges of the departments listed above. Indeed, the team found it useful, beyond the information provided to the authorities at various levels, in charge of secondary education, to go to the first concerned and beneficiaries of the scholarships and to provide them with information on the forthcoming launch of The MasterCard Foundation’s scholarship program.

Due to the high number of schools and colleges existing by department, an arbitrary choice was made each time for the visit of a sample of schools. Direct contact with the learners allowed the delegation to educate them and inform them about the scholarship program and especially its content. The aim was to further motivate the candidates for this current year’s baccalaureate and the future candidates for the next cohorts so that they focus on work and pass their exams with great results.

The delegation also had to address the concerns of a few learners who were most often related to the maximum age to benefit from the scholarship and the guarantees of transparency and fairness that surround this program in the selection process. With regard to this last concern, which was shared by the departmental directors and the heads of institutions, the delegation reassured them all that arrangements have been made to ensure transparency in the selection process including the involvement of representatives of certain ministerial departments, non-governmental organizations (Social Watch, Plan International Benin). In addition to these structures, field surveys will allow the selection committee to do background checkings of applicants prior to any grant.

The students in the northern regions have mainly wondered why the scholarship only covered scientific domains. The students in the literary sector felt somewhat neglected. But it was explained to them that the courses and training fields chosen at the University of Abomey-Calavi (UAC)   were those who corresponded to the development needs of Benin. However, literary fields should not be discouraged because outside the MasterCard Foundation, there are other government scholarship programs that allow the best at the baccalaureate exam to access the university.

Another concern was the choice to put all students in Benin into competition irrespective of the study streams involved. It was raised by students in F3 (electricity) and F4 (building construction) of technical high schools, who consider that their subjects to be studied for the baccalaureate are more numerous than those of the C and D streams. In addition, they do not have the same math courses and hours of classes in mathematics and physics as those of teaching colleges. They therefore consider that they would be disadvantaged in front of those who will necessarily have the best averages in the baccalaureate. It was explained to them that this should not be a difficulty as an excellent student always strives to work regardless of the conditions of study. In addition, the selection board will take into account the results in the 6th and 7th high school years in order to be sure that they are actually the most deserving ones that are integrated into the MasterCard Foundation’s scholarship program. In general, students have shown a strong enthusiasm for the MasterCard Foundation’s scholarship program